Our breeding combination produces what is called SUGAR DOODLES or TEDDY BEAR DOODLES.  They tend to be more hypoallergenic and with much softer fur. 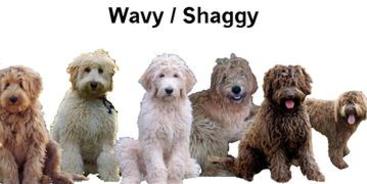 Our mom is a straight English Cream Golden Retriever.  What makes ours different from other Goldendoodles is the softness added to their coat because of the English Cream breed.

"What is a Golden Doodle?"

A Golden Doodle is a hybrid of a Golden Retriever and a Standard Poodle. This cross provides the best benefits of both breeds. Doodles provide a drastic difference in shedding, and sometimes almost no shedding. So families with allergy issues often can tolerate Doodles. Not to mention that Doodles can have very wavy to just slightly wavy hair that can be of the texture of a golden or of the soft silky hair of the poodle or anything in between! Their intelligence is above and beyond average as well. This is probably because of the high intelligence of the Golden Retriever and even higher more complex intelligence of the Poodle combined with the faster maturing traits of the Golden Retriever. There is a benefit of Hybrid Vigor in that genetic defects that are common to specific breeds can not be replicated in a cross of two breeds. This provides a healthier puppy that will be free of some of the inherited defects that can come with specific single breeds. Its been known that they can be healthier and live longer than either of the breeds individually because of this benefit. But you don't have to take our word for it, do a search, you can see for yourself. Personality wise, if you've ever known a golden doodle then hands down you know what amazing dogs they are! If you
don't know one, you definitely should!

"What is a Sugar Doodle?"
"SugarDoodle" is the term we use for when we create Golden Doodle puppies that have the English Creme Golden Retriever Lines in them. This creates a beautiful Doodle who is much lighter in color than the average Doodle and has more of the English Creme Golden Retriever features with the decreased shedding of the Poodles. The English Creme lines of the Golden Retrievers do appear to shed a little more even than American lines of Golden Retrievers so there may still  be some shedding in a Sugar Doodle puppy that has these lines, however it will be minimal.  English Creme lines of the Golden Retriever are still purebred but they are a more exquisite variation within the breed where they tend to lean more towards the slightly shorter, stockier framing scale and the coat is much lighter, sometimes almost white.  The coat also tends to be softer and silkier. These lines
tend to be even more mellow. They are truly show stoppers. So using them to create a Golden Doodle is like getting a puppy that is just as white and sweet as sugar. Hence the name "Sugar Doodles". They have been stunning!

"What are the differences in the coats or fur"

"What one is better?"
That is purely a matter of preference. They all will have that wonderful Golden Doodle personality. There isn't going to be a difference depending on what type F1 or F1b, in my opinion.  This is where we can work with you to find out what it is that you are looking for in both appearance and personality. We would never breed any of our dogs if they had any allergies, health issues, or temperament issues. Every litter may have some variances  amongst each litter mate. However, every litter has the more reserved or the more bold personality pup too and we spend hours and hours with these puppies, really get to know them. We can help pair you up with just the  right puppy, all you have to do is let us know what you're looking for.

Golden Doodle x Standard Poodle
F1b-More Poodle
Creates:  F1b Golden Doodles
Cross %:   75% Poodle/25% Golden Retriever
Coat Type: Varies, but leans towards more wave, more hair (less fur) type coat.
Shedding: Very little to almost none. Least Shedding of all GoldenDoodles. Very possible to hardly shed at all.
Allergies: Varies depending on coat, may have very minimal dander to no dander. Best for those with dander allergies to dogs. Good for families with
moderate or strong allergies to dander.
Framing: Varies.  Will be the avg size of a golden retriever and under the coat possibly slightly more slender.
Grooming: Varies, depends on coat type. Probably need to be groomed 2 or 3 times a year depending on preferences.
Perfect For: Families with dander allergies of moderate/strong or those looking for the most non-shedding Golden Doodle, or for the most wavy type of coat. Even easier to train than Golden Retrievers, yes it is true!

Are similar to this percentage of 50/50 but with even less shedding and  dander and improved Hypoallergenic quality. Their coat type amongst the litter is more consistent between each other.

When we begin our new story with MAGGIE our Parti-Poodle, we will probably have more curly and spotted puppies.  She will be bred in the Spring of 2019 to a chocolate Goldendoodle. 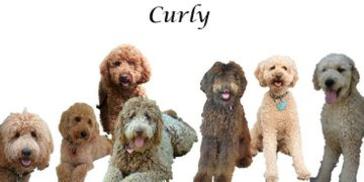 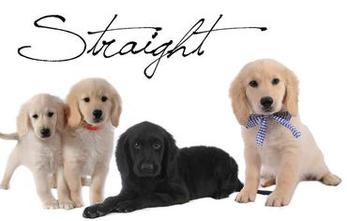 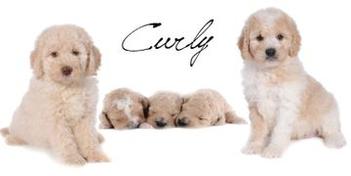 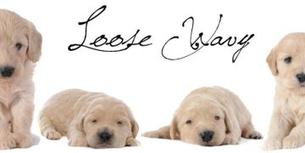 These images originated from the Goldendoodles Breed page. 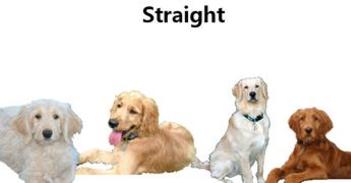 We have only had two truly curly Goldendoodle puppies.  These tend to be much like the poodle fur with tight curls all over.

One thing you should always keep in mind is that NO BREEDER can tell you exactly what kind of coat your puppy will eventually have.  Yes, we can make an educated guess based on previous litters, but there is not a scientific way to prove you will get a certain type fur.

Highly desired because of the ease of grooming.  Just the perfect mix of curl and straight.  Our Sire/dad is a loose/shaggy Goldendoodle.